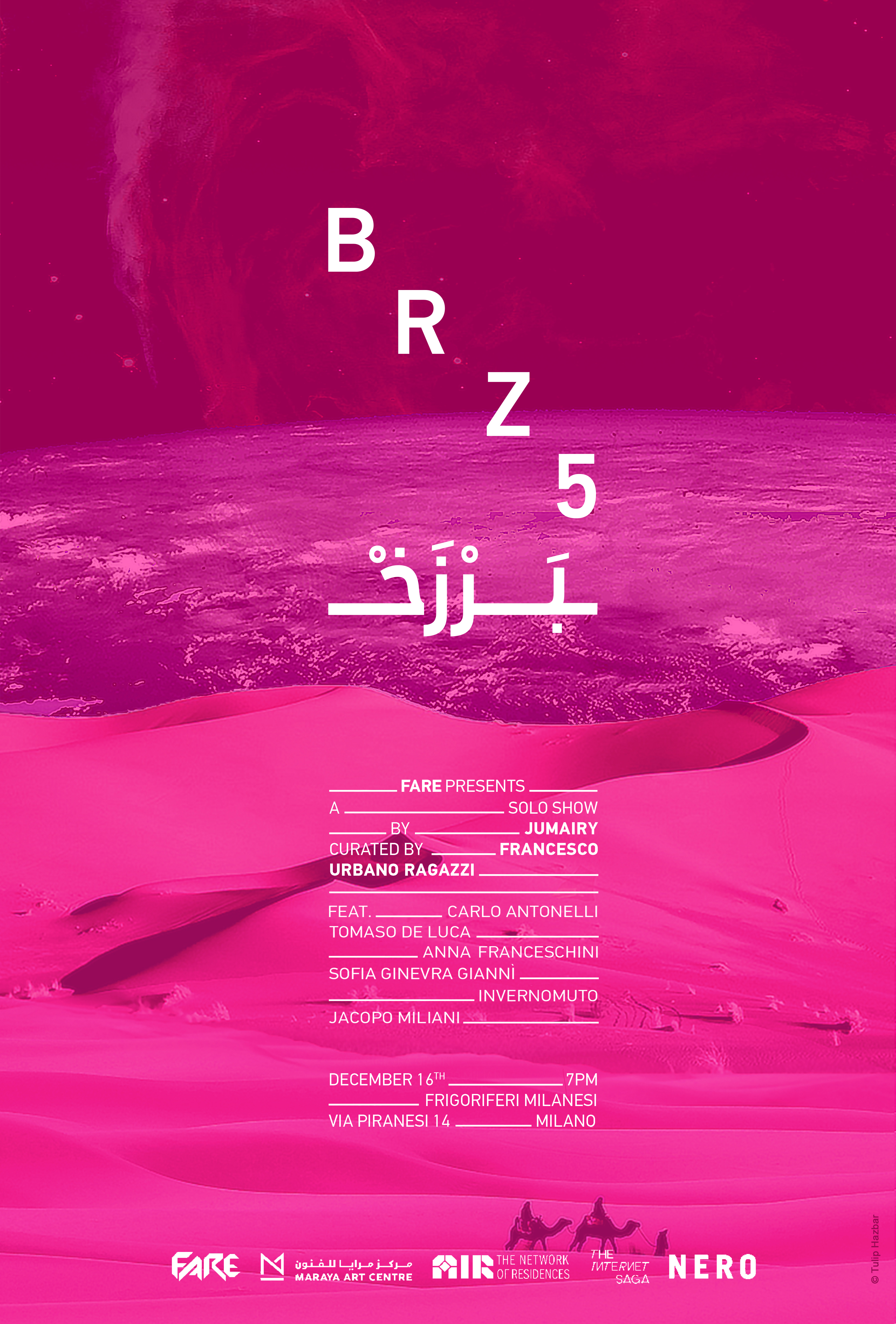 In the limbo between Sharjah and Milan.

BRZ5. The collaboration between FARE (Milan) and Maraya Art Centre (Sharjah, UAE) ends, at least for this year, with a very mysterious title. The solo show of the Emirati artist and musician Jumairy, which has been organized by curatorial team Francesco Urbano Ragazzi, opens on Friday December 16th at 7pm just above the Palazzo del Ghiaccio at Frigoriferi Milanesi, via Piranesi 14, Milan.
BRZ5 is not a secret code but an abbreviation of the word Barzakh, which in Arabic designates the limbo where the souls wait for Judgment Day: the threshold between the universe of the living and  of the dead.
Jumairy has transformed the rooms of an apartment into his personal Barzakh, a labyrinthine antechamber to celebrate a vigil: the passage between childhood and adulthood, memory and amnesia, insomnia and lucid dreaming.
A domestic space is covered by a dense darkness, fragmented only by some rays of light from a few torches. Looking carefully in their direction it is possible to distinguish some black and white images, not entirely decodable: these are the last remains extracted from the smartphone the artist took with him during his first residency in Milan and broke forever on that occasion. In this way, the trails of a parallel life become public and get restored, slowly exhausting together with the batteries of torches. The psychological processes related to the elaboration of grief are transferred from the human mind to the mechanisms of an external memory.
Not without irony, a soundtrack – Sam’s Song – that activates itself at regular intervals is also dedicated to the lost memory of the smartphone. Here Jumairy’s altered voice repeats “I feel uninspired” like a litany accompanied by electronic music.
Around this rhythm, objects, perfumes and poetic texts written by the artist’s grandfather are disseminated in the exhibition space, in addition to compulsive rituals freely inspired by the Emirates’ funerary traditions and horror films cliché.
As if it was a movie, BRZ5 includes some cameos: the extraordinary participations of Carlo Antonelli, Tomaso De Luca, Anna Franceschini, Sofia Ginevra Giannì, Invernomuto, Jacopo Miliani, artists and personalities who marked the time that Jumairy spent during his residency at FARE. Their contributions to the exhibition take shape not only in the physical space of Frigoriferi Milanesi, but also online on the Nero website, which becomes a digital house for BRZ5: a special online project will be launched there at the beginning of 2017. Further online extensions of the exhibition will also be shown on the Instagram profile of The Internet Saga, a research platform operating between art and the Internet established in 2015 by the curatorial duo Francesco Urbano Ragazzi.

Jumairy (Dubai 1992) develops his own research connecting his studies of psychology to an intense experimentation with sound. The combination produces a range of sensory experiences, traces more than closed works, that spread from real space to the Internet. The artist infuses his imagery with a dark psychedelia that is expressed through performative acts, scientific experiments and mysterious rituals which happen on stage, the big screen and smartphone apps. The same can be said of his approach to music production, in which the Arabic electro-pop is intertwined with sounds à la Marilyn Manson.But Jumairy is not just a teen idol who speaks to the new generation of Emiratis. Many of his works are indeed conceived to process traumas, both personal and collective. Just this year for example,  the artist, commissioned by Art Dubai and Delfina Foundation, has dedicated a project to insomnia as an expression of social anxiety in competitive, market-oriented environments. It is The Sleepless Pe-Tal, a clinic for treating sleep disorders through sound frequencies. The artists is supported by Barjeel Art Foundation and Maraya Art Centre, who acquired his works.
www.jumairy.com

FARE was founded in 2008 with the aim to enhance and promote contemporary culture in the field of visual arts with an interdisciplinary perspective. It interacts with public and private entities in a vision of networking and by sharing of interests, projects, strategies. The result are the articulation and management of national and international networks in the field of training and mobility for artists, curators and cultural professionals. In 2010 FARE has created AIR – artinresidence, the only Italian network of artist residencies, becoming in Italy the reference body for the mobility of artists. Besides working with the traditional format of the residence, FARE develops exchange programs in collaboration with international partners. These programs are based on interdisciplinary research, sharing of knowledge, exchange of experience and they investigate different areas of interest: the know-how of residential practices; the relationship between art and the public sphere; audience development.
www.farearte.org