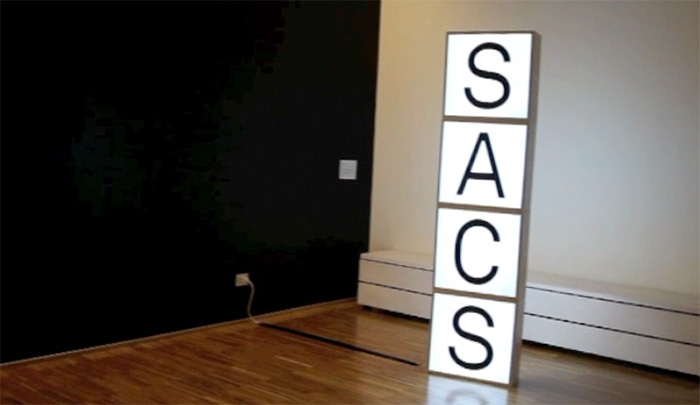 A new branch of Riso, Museo d’Arte Contemporanea della Sicilia opens at Frigoriferi Milanesi on 6 April. Born out of the collaboration with Frigoriferi Milanesi and the cultural association FARE, the office will house the archives of S.A.C.S., Sportello per l’Arte Contemporanea Siciliana, which documents more than seventy Sicilian artists. That same day, on the ground floor of the exhibition space, “Archive Fever” opens the new Galleria S.A.C.S., a meeting place open to the public that will broaden the archives activities to exhibitions, book presentations, discussions, and cultural projects.

“Archive Fever” is a group exhibition curated by Giovanni Iovane. The exhibition, which will remain open through 15 May 2011, analyzes the output of Sicilian contemporary art through the work fifteen artists from the S.A.C.S. archives. It includes more than twenty works realized, some expressly for this show, in various techniques ranging from drawing and painting to photography and from video to installations, by the artists Adalberto Abbate, /barbaragurrieri/group, Federico Baronello, Manfredi Beninati, Marco Bonafè, Rita Casdia, Benny Chirco, Gabriella Ciancimino, Annalisa Furnari, Stefania Galegati Shines, Francesco Lauretta, Concetta Modica, Paolo Parisi, Maria Domenica Rapicavoli, and Sandro Scalia “The title,” explains Giovanni Iovane, “is borrowed from the English translation of Jacques Derrida’s well-known text. In that book the French philosopher meditated on the historical and psychological attributes of archives both as an institution (place, hierarchy, power, authority) and as an impression, a psychoanalytical trace. The exhibition “Archive Fever” reflects, in essence, on the concept and practice of museum archives, such as Riso’s S.A.C.S. archives. The exhibition is also, and above all, a concrete project of the space of the archives itself.”

As part of Riso’s cultural project, conceived and curated from the very start by Renato Quaglia, S.A.C.S. began collecting all of the documentation on an ample number of young Sicilian artists in a real dynamic archives in 2008. This initial phase, curated by Cristiana Perrella, was broadened under the curatorship of Helga Marsala, first, and now Giovanni Iovane, curator of the archives’ exhibitions for 2011.
Riso’s cultural project and strategy provides for the transformation of this important museum facility into a real and concrete number of places, in which to initiate and carry out various processes bound to contemporary artistic experience: documentation, promotion, visibility, and exchange. For about a year now S.A.C.S.’s efforts at conservation and information have been flanked by the creation of special exhibition spaces for presenting projects and works by artists in the archives. In 2010 this led to the creation of the Galleria S.A.C.S. at Palazzo Riso in Palermo and, immediately after, its counterpart at Fondazione Brodbeck in Catania, where, every month, some of the artists in the S.A.C.S. archives have mounted site-specific projects.
Another highly significant step in this process of re-duplicating the place of an archives is, now, the opening of the Galleria S.A.C.S. at Frigoriferi Milanesi in Milan. In this case as well Riso’s cultural strategy doesn’t foresee a neutral exhibition space but “a collaborative inroad” in a historical Milanese reality such as Frigoriferi Milanesi, which has been the site of various facilities, ateliers, and important operative realities in the field of the visual arts.

Alongside the branch office, which will be open to the public three days a week from 6 April on and will make it possible to consult the entire archives, Galleria S.A.C.S. will be devoted to periodic temporary exhibitions.
Though the S.A.C.S. archives has a virtual space online, the project strives at turning the static, and normally hardly visible, archives into an open, active, and proactive facility. In accordance with Riso’s strategic

mission, it wants to transform itself into a sort of working platform that flanks documentation and cataloguing with cultural projects and promotion. This is highlighted and symbolized by Kit, a sort mobile and portable “exhibition unit” that is both exhibitor and container. Designed expressly for the archives by the architect Francesco Librizzi, this structure will be an integral part of the Frigoriferi Milanesi office and will be used in the installation of the exhibition “Archive Fever” as well as future exhibitions. Mobile like S.A.C.S., the various components of Kit can be moved from place to place as though it were a large “suitcase”, following the flow of the activities scheduled in the three exhibition spaces in Milan, Palermo, and Catania.

The Milan example shows that it is possible to speak, in different territories, of a strong local artistic identity that reflects and gives voice to the distinctive characteristics of the people living in Sicily today. The strong relationship between local production and its international frame of reference is one of the most outstanding characteristics of this new identity: contemporary art becomes competitive through comparison—which breeds growth—between our reality and others nationally and abroad.

On the occasion of these two events, a new catalogue of the S.A.C.S. archives—updated to 2011—has been published, including essays by Antonella Amorelli (Riso’s general coordinator) and the curators Giovanni Iovane, Helga Marsala, and Cristiana Perrella.

The exhibition and the S.A.C.S. archives open on 6 April at Frigoriferi Milanesi in Via Piranesi 10, Milan. The exhibition will remain open through 15 May; the archives is open to the public on Wednesdays, Thursdays, and Fridays from 15 to 20.

Giovanni Iovane is a professor of the history of contemporary at the Brera Academy of Fine Arts in Milan. As an art critic and independent curator, he has written numerous critical essays and serves as managing editor of outline, a collection published by Silvana editoriale in Milan. He has been a guest curator at the Lenbachhaus in Munich and at Museo Cantonale d’Arte in Lugano. For Museo Riso, he has curated the exhibitions “Others Resident” and “PPS Paesaggio e popolo della Sicilia” (open through 1 May 2011).